Open to the public by general admission the BC Aviation Museum Society is dedicated to preserving aircraft and aviation artefacts. The museum collects, restores and displays aircraft and artefacts related to the history of aviation in Canada, with emphasis on British Columbia. Museum activities include aircraft restorations to static or airworthy status, constructing engine displays, modeling aircraft, maintaining artefacts, books, pictures and videos representative of flight, and creating memorials to aviation and the people who made it happen. 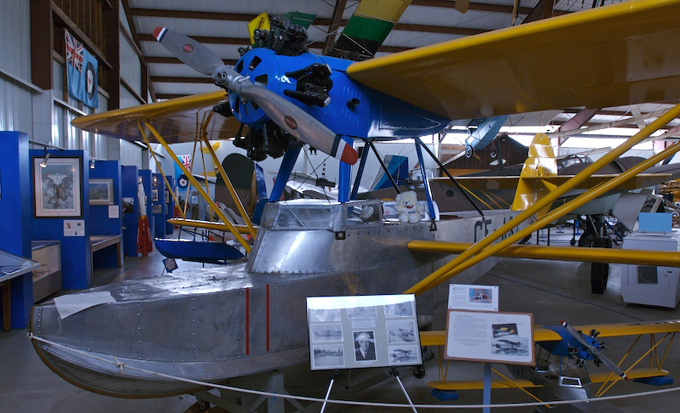 "Unique to Canada and British Columbia, and the only example left in the world, it is one of 18 designed and built by Tom Towle and Jim Eastman of Detroit Michigan, and one of five used in British Columbia for many years. The aircraft displayed here has been restored by using the remains of two Sea Rovers, CF-ASY and CF-ASW." 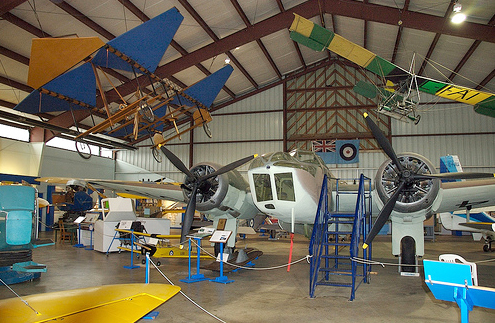 The golden age of flight restored

A group of knowledgeable volunteers at the B.C. Aviation Museum is busy returning a ’50s-era Vickers Viscount to its former glory
BY JOANNE HATHERLY Times Colonist staff
November 26, 2007

A piece of Canada’s aviation history is getting a new life, thanks to a few carelessly spoken words.

In early June, 76-year-old Al Catterall made a casual comment about a 1957 Vickers Viscount 625 airplane parked at the B.C. Aviation Museum in Sidney. “Some retirees should get together and work on that old plane,” mused the retired pilot, who flew the plane many times for Air Canada and its predecessor, TransCanada Airlines.

A few days later, Catterall opened his mail to find a letter from the president of the museum’s board on the group’s letterhead.

“The board of directors discussed your offer to arrange for work on the Viscount,” began the letter. Farther down the page was a six-point list of requirements, staffing, insurance issues, scheduling and progress reports.

Sitting in the lobby at the museum on a rainy day in November, Catterall, his posture perfect and his demeanour as calm as one hopes for in a career pilot, laughs as he reviews the letter. “I was only talking,” said the Sidney resident, who retired in 1991after a 38-year flying career. Catterall isn’t just talking anymore. He and a crew of other retirees, many of whom are former Air Canada or TransCanada Air Lines pilots, are restoring the plane that Catterall affectionately calls “the old kite.”

The British-made Vickers Viscount was the world’s first turbo-prop airliner and has been called one of the most successful first-generation post-war transports. Several models are being preserved or restored in far-flung places, including the U.S., Australia, Germany, New Zealand, Brazil and Turkey. 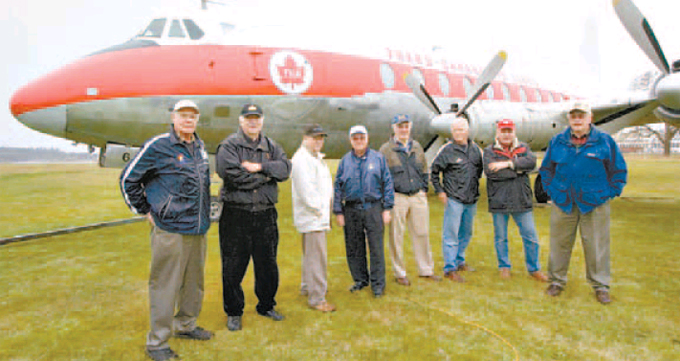 The Viscount’s first North American flight was from Montreal to Winnipeg on April 1, 1955, piloted by Walter Kent and Dave Tribe. Tribe, who now lives in Sidney with his wife, Ruby, and their black cocker spaniel, Rosie, had no fears about being the first to fly the Viscount. As an RCAF/RAF pilot in the Second World War, he flew 30 operations over enemy territory, including one where he limped his aircraft home after a hole was accidentally blown in a wing by another RAF unit.

When he landed the Viscount at the Winnipeg airport after its maiden flight, the craft was greeted by throngs of media. But even as he sat in the cockpit, he could see a Trans-Canada Air Lines ground chief pilot waving him on to start the plane up for its next flight. It was back to business as usual. “There was a schedule to keep,” says Tribe.

When he first visited the cockpit of the old Viscount at the B.C. Aviation Museum field, he was surprised at how small it was, and wondered how he ever fit into it.

In England, another recently acquired Viscount has been taken in by a nonprofit called the Viscount 35 Association, which hopes to fund a restoration by renting the plane out as a prop for film, documentary and television productions.

Here, museum volunteers worry what more exposure to the elements will do to the Viscount, and are actively fundraising to build a hangar for the plane, which easily outsizes the rest of the museum’s exhibits.

Catterall says the Viscount represents Canadian aviation’s “golden age” — there were 51 in Trans-Canada’s fleet, he says, used across the country and down to the States.

“It’s very light on the controls, very responsive,” says Catterall. “Anybody that flew it loved it. Because the engines are turbines, they’re beautifully balanced, there’s almost no vibration and you get a very quiet ride inside. It was extremely popular with the travelling public.” Indeed, the plane’s elliptical windows stretched from the passengers’ hips to the tops of their heads, allowing a panoramic view that pilots exploited to good effect.

Tribe agrees the plane was a dream to fly, noting it replaced piston-engine planes that “rattled and banged all over. You can imagine how much the passengers preferred the Viscount.”

In the days before fuel limitations and computer-controlled flight paths, pilots enjoyed greater latitude. With the ability to choose their own flight paths and elevation, they often just followed the rail lines, Tribe says. Catterall recalls older pilots who thought nothing of dipping to 2,000 feet to fly by visual flight rules rather than instruments. Catterall has circled over a white-sailed Portuguese codfishing fleet and cruised in for a close-up of Oregon’s stunning blue Crater Lake.

After the Viscount turbo props were retired by Air Canada in the early 1970s, the B.C. Institute of Technology in Burnaby acquired the 625 for its mechanictraining program. Later, the school used it for firefighting simulations, and finally, it was barged across the Strait of Georgia to the Pat Bay airport, where it was towed to its present site.

Catterall says the plane was a “real mess” when the museum acquired it. “[BCIT] sprayed it with [flame-retardant] foam, and that pulled the white paint off the top. It ran down the side and ruined the aluminum.”

Through the summer months, Catterall and his crew — which includes Bob Hallworth, Wally Hasker, Steve Butler, Dave Peters and Stan Hegstrom — sanded the exterior aluminum panels by hand, then buffed them with power tools to restore the original shine. Other volunteers have worked on the interior. When work is complete, the museum hopes to offer the plane as a walk-in exhibit.

In the meantime, Catterall likens working on the plane to working on a classic car. “If you owned your first car, and then acquired it again years later and had the fun of restoring it, it takes you back.”