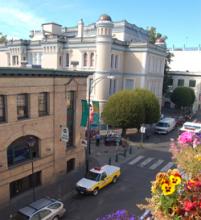 Experience yesterday today as you travel back in time to the days of pirates, shipwrecks, exploration and discovery. See Tilikum, a dugout canoe that sailed from Victoria to England.

Established in 1954 as a non-profit society, the Maritime Museum of British Columbia was originally a naval museum located on Signal Hill just outside the gates of HMC Dockyard. By 1965, the museum's artifact collection had outgrown the premises and the museum moved to its present location, in the Provincial Courthouse.

The fog shrouded Pacific Coast of North America has a deep and rich heritage that spans the centuries from the first aboriginal cultures to European exploration and early settlement. Initially isolated from the European world, this region witnessed the navigation feats of early mariners and the clash of empires. Meet great characters such as Captains James Cook and George Vancouver, witness the territorial see-saw between Russia, the United States and British Canada, and discover the many mysteries of this coast. 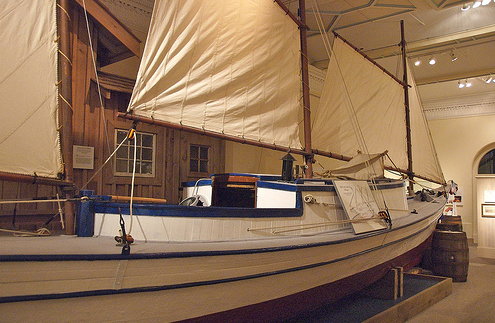 "In 1901 Captain Voss left Oak Bay, Victoria, in the modified cedar dug-out canoe the Tilikum on a journey in which he intended to circumnavigate the world. The voyage was to last 3 years and 3 months from Victoria to Margate, England.

Journalist Norman Luxton accompanied Voss for part of the voyage. It was hoped that Luxton's writings would help finance the expedition. Dropping Luxton off in Fiji, Voss then took on a series of temporary first-mates, one of whom was swept overboard in a storm, carrying with him the boat's only compass. In 1904 Voss and his final first-mate arrived at Margate. The vessel was exhibited at Earls Court, London in 1905 after which it was sold and passed through a number of hands and was discovered in 1929 lying derelict.

Through the efforts of concerned Victorians, Tilikum was crated and returned to Victoria by freighter where restoration was carried out by the Thermopylae Club. She can be seen on display at the Maritime Museum of British Columbia."

(From the website of the Maritime Museum of British Columbia in Victoria, BC:)

Paying tribute to the navigator

The Maritime Museum of B.C.’s summer exhibit, A Star to Steer By, opens today to coincide with the start of the weekend-long Victoria Tall Ships Festival.

The exhibit runs through November 2, 2008

The exhibit acknowledges the contribution of navigators to the discovery of new lands and sea-going trade routes from 1000 BC to 1800, according to Richard Mackenzie, the museum’s collections and exhibitions co-ordinator.

“This shows people that other nations developed ways of navigating,”  said Mackenzie, “I think there’s a certain ethnocentricality. We learn about western Europeans. We don’t hear much about the Chinese, for example.”

The exhibit uses ship models, images, text and artifacts drawn from the museum’s collection. The exhibit was assembled by staff in consultation with Keith Shearer, a local collector of navigation equipment.

The exhibit begins with the Austronesian adventurers, who sailed uncharted seas guided by the stars and swell patterns around islands. The Phoenicians used the sun and the stars to travel as far west as the Canary Islands from the Mediterranean, and north to the English Channel.

The Arabs adapted the astrolabe, initially used to determine the exact time of sunrise and sunset for religious purposes, for travel in the Indian Ocean. The Chinese discovered the magnetic lodestone and created compasses. Both instruments played major roles in European voyages from the 15th to the 18th centuries.

Looking at a map of Vancouver Island, one might think that the British and Spanish were the only ones to leave their mark on Victoria’s maritime culture.

It’s just not so, says Greg Evans, the executive director of the Maritime Museum of British Columbia, which will offer a “Maritime Mosaic,” a new component of this year’s Tall Ships Festival, which kicks off today with the Parade of Sail at noon.

The museum is co-ordinating with cultural groups in Victoria to peel away the city’s veneer of British culture to reveal a rich and varied ethnic underbelly.

“It’s so important to get this story out,” Evans says, “because a lot of these groups have been ignored in the standard history texts.”

The multicultural showcase will feature 20 pavilions from Victoria’s cultural groups that have contributed to the city’s maritime heritage. The cultural exhibits will include interactive displays and performances.

“We’re trying to showcase for the public the many ethnic and cultural groups that have collectively created the maritime heritage that we enjoy in this maritime province,” Evans says. “Scandinavian, Chinese, Portuguese, Scots, native populations — it’s a very rich palette.”

Kit Wong, 62, president of the Consolidated Chinese Benevolent Society which is preparing a pavilion for the Maritime Mosaic, can attest to the Chinese population’s contribution to the province’s maritime culture.

“Every time you look on a ship’s records, you’ll see there were Chinese working in the galleys and the laundry,” Wong says. Wong, a retired lieutenantwith the Royal Canadian Navy, notes China has a long seacoast and a vibrant maritime culture of its own.

“But this was never recognized by the Western world. It’s very unfortunate,” Wong says, and so the seamen who migrated to Canada were not allowed to share their seafaring skills on these shores and were relegated to menial tasks.

Wong doesn’t look on the Chinese time in the galley as only being due to old prejudices. “They were great cooks,” he says. “But they were poorly paid.”

The Chinese pavilion will showcase artifacts, Chinese folk art, documents, as well as line-dancing and dragon-dancing.

Another group that is not well-known for its contribution to the Pacific Northwest’s maritime history is the local aboriginal population, whose members often signed on to serve ships plying these waters.

Other cultures that will participate in the exhibits include Norwegians who in the latter half of the 19th century took part in the Victoria sealing industry, Greek and Japanese communities that were active in the salmon fishery in the early 1900s, and the native Hawaiian Kanakas who crewed Hudson’s Bay Company ships in the 1800s, and whose descendants still form a community on Salt Spring Island.