The Navy Lighting Contest for 2012 at Canadian Forces Base Esquimalt has been postponed primarily due to extensive ongoing construction at Her Majesty’s Canadian (HMC) Dockyard.

“I fully recognize that the Navy Lighting event has become a tradition for many of us, including our neighbours in the community,” said Captain (Navy) Bob Auchterlonie, Base Commander of CFB Esquimalt. “My decision is based on a number of factors including the ongoing construction and renewal in HMC Dockyard, the ability for personnel to safely decorate buildings near the work being done, as well as the unavailability of ships due to operational and maintenance requirements.”

Millions of dollars in construction work is being carried out in a variety of locations on the base. As well, a number of Pacific Fleet ships are either deployed or undergoing extensive maintenance work that precludes their availability to support the Navy Lighting Contest this year.

The annual Navy Lighting Contest has been a unique holiday tradition for a number of years. Last year, nearly 5,800 visitors toured HMC Dockyard by bus via a pre-determined route, viewing the decorated ships and buildings, and voting for their favourite.

Navy Ships Lighting Contest at CFB Esquimalt is an annual event supporting the Mustard Seed Food Bank. Access to view the colourfully lit displays on the ships and buildings at CFB Esquimalt is by bus at the Naden Gate (Admirals and Woodway).  Admission is a food item or cash donation to the Mustard Food Bank and they will be on-site throughout the contest collecting donations. Visitors can vote for their favourite ship or building. This event is firmly entrenched as a Victoria tradition and is an important link to the Greater Victoria Community particularly for those who depend on the Mustard Seed Food Bank. Considerable challenges due to security reasons have not dampened Victorians great generosity who have been visiting the Dockyard during the holidays with a donation to the Mustard Seed, and voting for their favorite display since 1987. CFB Esquimalt is grateful to the local business sponsors for their monetary support of the event and to the media sponsors for keeping the public informed about the display. 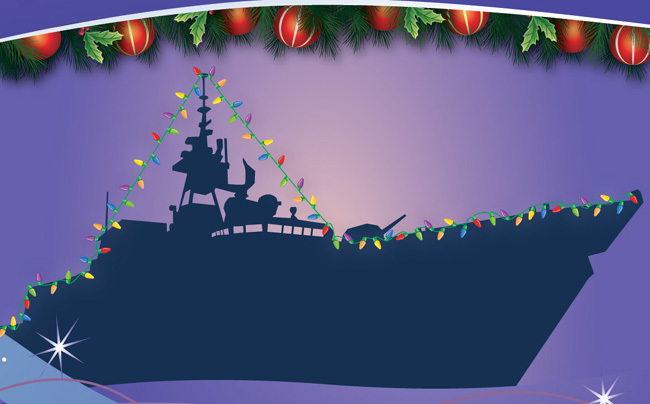