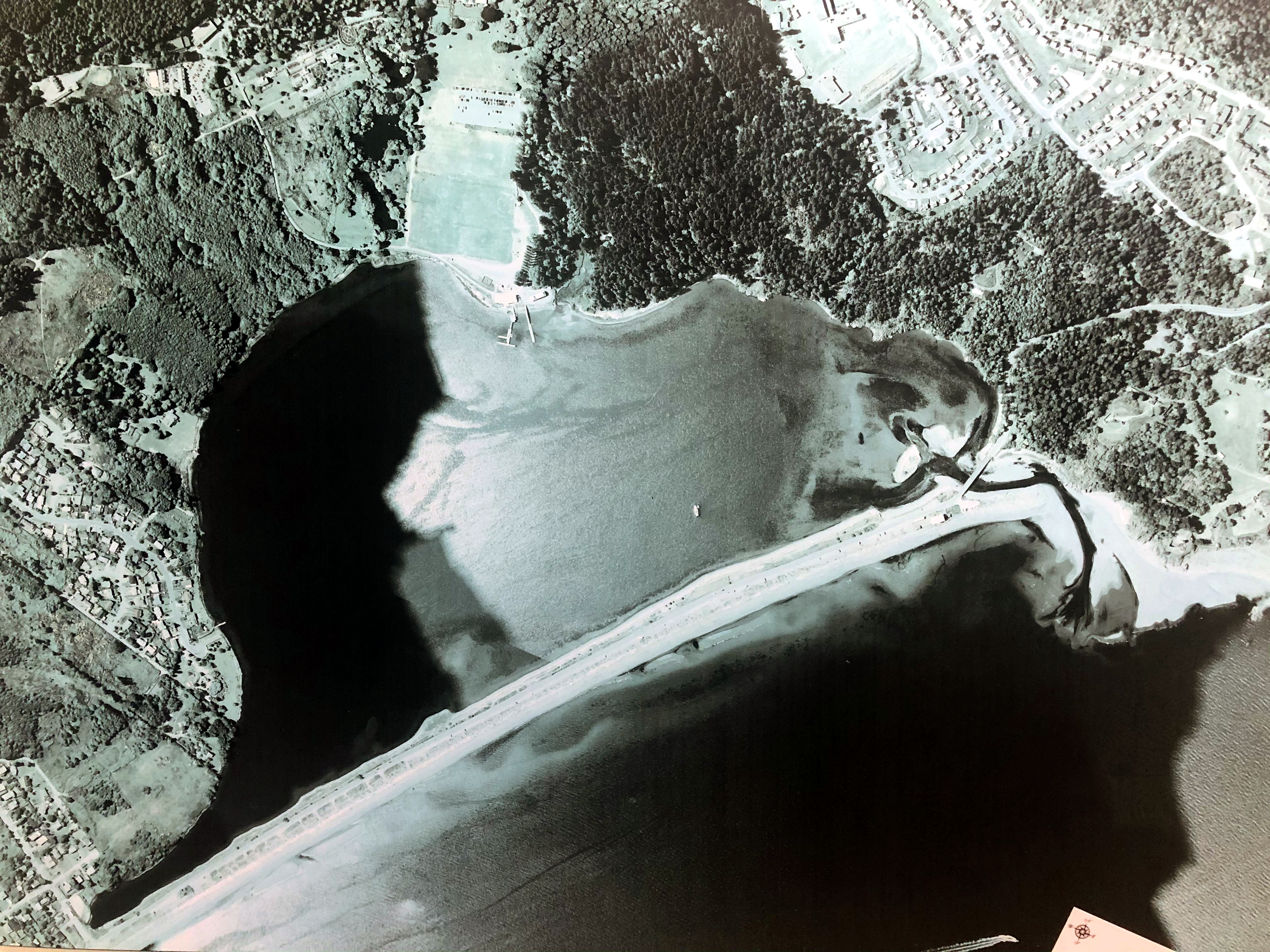 The Esquimalt Lagoon is "our backyard" in the western community of Colwood and not in Esquimalt. The east end of the lagoon is quite shallow and enjoyed by many exploring sand dollars and crabs. The tide flows through a channel at this end leaving a "salt-water river" effect for families with children of all ages to have fun in the water. Low tide also reveals a vast expanse of sandy beach. The 2 mile sandy spit is Victoria's favourite family BBQ and picnic gathering spots. A variety of food trucks and musical entertainment are popular in the summer.

The Colwood shoreline is classified as a moist maritime Coastal Douglas-fir (CDFmm) biogeoclimatic (BGC) zone. The area experiences relatively warm, sunny weather in the summer and mild, wet winters. The area’s location is sheltered in the rain shadow of the Olympic Mountains, and moderated by the Pacific Ocean. It yields drier weather than the exposed surrounding areas of Vancouver Island. Typical forests in the area are dominated by Douglas-Fir, Grand Fir, and Western Redcedar. Drier, rocky outcrop sites are populated by Arbutus, Garry Oaks, and their associated plant communities. The areas of old growth forest and mature second growth around the Esquimalt Lagoon provide a critical connection between the terrestrial and aquatic realms of the lagoon. These forests provide high value habitat for a wide variety of wildlife. They support lush floral biodiversity, maintain water quality and slope stability, provide food sources for aquatic life and avifauna, and hold more carbon than adjacent younger forest. In particular, the riparian forest provides shade, cover, and nesting opportunities for avifauna.

The Esquimalt Lagoon Migratory Bird Sanctuary has been protected for nearly a century. It was initially started to minimize impacts related to over-hunting of waterfowl. Between October and May, thousands of waterfowl frequent the shallow, tidal waters of the lagoon, which provides important foraging and nesting habitat and supports both resident and migrant birds. The entire lagoon and 100m of surrounding land on the backshore of Esquimalt Lagoon, encompasses 134 hectares in total and regulates various activities and uses that are considered disruptive to migratory birds. Over 250 species of birds have been observed at the lagoon. The Pacific Blue Heron, a provincially blue-listed species is known to frequent the lagoon. In addition, regionally rare species such as the Brant (blue-listed), Eurasian Wigeon, American Golden-Plover (blue-listed), Common Tern, Horned Lark and Western Meadowlark have been observed. The lagoon is also home to an introduced, non-migratory population of Canada Geese. These resident geese have created significant problems with fecal coliform levels in surrounding waters, impacted crops for local farmers and denuded shoreline and salt marsh vegetation because of grazing. Control of geese (i.e.: egg addling) is recommended as a stewardship activity where feasible.

Several watercourses convey both groundwater and storm runoff from surrounding land into Esquimalt Lagoon. The water entering the lagoon provides important habitat for salmonids, forage fish, crustaceans, bivalves, and other vertebrates. The estuarine condition of the lagoon supports both eelgrass and kelp beds which provide spawning habitats for herring as well as foraging habitat for marine mammals, fish, and birds. Finer substrate sediments from the gravel pit operation helped create the sandy beaches along the spit which characteristically support forage fish spawning. The intertidal salt marsh habitat found along the perimeter of Esquimalt Lagoon is an important element of marine shorelines it provides food sources and cover for wildlife while offering resiliency against many issues related to sea level rise – including flood protection and carbon sequestration. In the past decades, the lagoon has been known to experience issues with water quality causing both algal blooms and fish kills. The cause of the blooms is unknown, but elevated nutrient input from stormwater discharges are suspected. In addition, the perimeter salt marsh areas are subject to trampling by pedestrian and dog traffic as well as damage from Canada Geese foraging and smothering from driftwood entering the lagoon.

Marshes are highly efficient at carbon sequestration and storage. However, the image (left) shows the inner lagoon shoreline, where logs are smothering the productivity of the marsh. Preliminary estimates suggest that carefully removing logs from the backshore area around the lagoon and preventing trampling could result in a 20% to 30% increase in marsh productivity.

Data from the BC Conservation Data Centre (CDC) indicates a total of 37 species and ecological communities around the shoreline, north of Lagoon Rd. There were no at-risk elements known in the study area to the south. The CDC designation of ecological communities as “rare” is based on climax community conditions with very low disturbance history. In addition to the terrestrial and avian species and ecosystems at risk, the surrounding marine habitat has been designated as critical habitat for killer whales (Northeast Pacific Southern Resident population).

Paleoenvironmental studies of southern British Columbia indicate that although minor regional changes have continued since the last glaciation over 10,000 years ago, relatively modern environmental conditions were established between 4,500-3,000 BP. Archaeological evidence of indigenous use in and around the Esquimalt Lagoon area dates back to this time range, consistent with paeoenvironmental projections.

The Lekwungen people of the Southern Vancouver Island and Salish Sea area occupied numerous villages in the lands between Cowichan Head and Parry Bay. In the 1850’s, several autonomous First Nations groups, including the Teechamitsa, signed a treaty with James Douglas, chief factor of the Hudson’s Bay Company and later Governor of Vancouver Island. The treaty recognized the land within the CWSP study area.

The ancestors of Esquimalt and Songhees people intensively used the Esquimalt Harbour, Esquimalt Lagoon, and surrounding land into the early historic period. Plant resources, including raw materials, berries, and roots tubers were collected along the shore and inland of the harbour; bear, deer, elk, game birds, and duck and other waterfowl were hunted and trapped in the area and camps were established in several areas along the north shores of the lagoon. Fishing and shellfish harvesting took place in Esquimalt Lagoon and in Esquimalt Harbour.

Some local groups had their own winter village sites, and likely all local groups had their own seasonal fishing sites. Larger winter villages consisted of several houses representing several local groups and kin groups. Within winter villages, members of different households cooperated in some subsistence activities and shared abundance of perishable foods. At their discretion, houses also cooperated in defense strategies and in ceremonial activities. Among the Northern Straits peoples, villages consisted of single houses or clusters of shed-roofed or gabled houses built in a row (or occasionally rows) along the beach. Families in winter villages moved regularly for their annual activity rounds, and Coast Salish families took the wall planks of their houses with them to their seasonal villages. The Esquimalt and Songhees were marine oriented groups, spending a large portion of their time near the Gulf and San Juan Islands hunting and fishing. Different archaeological sites within the Esquimalt Lagoon area indicate that Esquimalt Lagoon possibly had seasonally distinct occupations.

Most of the early historic Euro-Canadian use of the Esquimalt Lagoon area has been associated with Fort Rodd Hill and the Hatley Park estate of James Dunsmuir, now known as the Royal Roads Campus. Post-contact use of the lagoon is summarized as follows: